A Brief History of Chatbots

What is the first thing that comes to your mind when you think of the sixties? The Beatles craze,  space travels, or mini skirts? These are undoubtedly signature landmarks of the decade. But surprisingly, the IT community bows down to this era as it jumpstarted the automation revolution and brought us the first chatbot ever.

A little bit too early you think? Well, Rome was not built in a day, and chatbot history didn’t kick off with Siri too. It took the chatbot industry years to evolve to the product we know and use nowadays. In this piece, 13chats invites you to a quick run-through tour of the history of chatbots. Let’s start, shall we?

In the way we know them now, chatbots tap their hats to The Turing test — an imitation game introduced in 1950. The test refers to a method measuring whether the computer is able to mimic human intelligence under specific conditions.

For the actual test, a human had to blindly decide whether they got a response from a computer or another human. If the questioner failed to tell the computer’s responses from the human’s most tries, the computer was considered to have artificial intelligence. 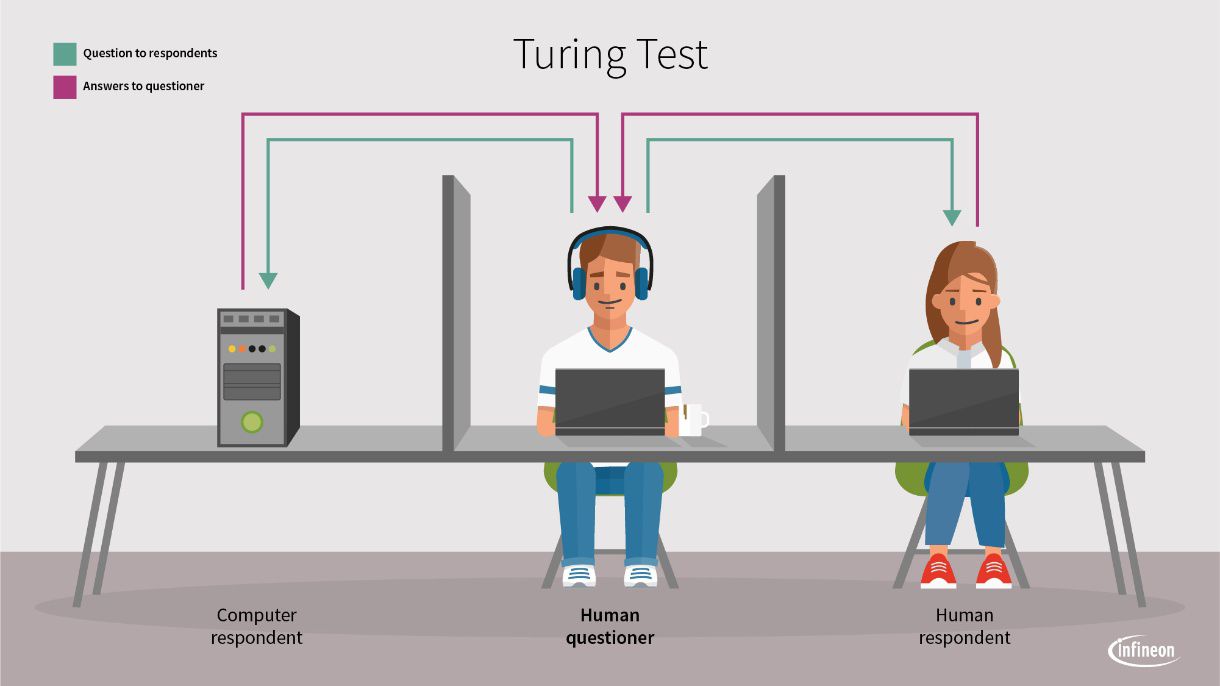 The test had nothing to do with chatbots until 1966 when the first chatbot ever — ELIZA — managed to pass the test, and basically tricked a human into thinking it was a human too.

Who run the world? Girls. The chatbot world is no different and run by the girl squad of ELIZA, A.L.I.C.E., Siri, Alexa, and co. We’ll start off with the ELIZA chatbot which was named after Eliza Doolittle from Pygmalion.

The chatbot was created by an AI specialist Joseph Weizenbaum. It was designed to simulate a human conversation by matching the users’ inquiries with a list of possible scripted answers. ELIZA examined the question for keywords and suggested a solution based on the keyword.

The chatbot could give itself away after several human-ish answers, basing on how the questioner ran the conversation. Typically, the chatbot would respond with “I see” or “I understand” when it couldn’t find a scripted answer.

The chatbot ELIZA was used to act in a manner of a psychotherapist and was created to reproduce a conversation in an initial psychiatric interview.

An example of a conversation with ELIZA

ELIZA gave room for the next step in chatbot development, a chatbot called PARRY. ELIZA was meant to simulate a doctor, while PARRY was created to simulate a patient with schizophrenia. The duo was used in psychiatry, helping to elaborate the dialogue strategy.

Psychiatrist Kenneth Colby created this chatbot in 1972. It modeled the behavior of a paranoid schizophrenic while ELIZA just imitated the psychiatrist. Because of these advanced settings, PARRY got called “ELIZA with attitude.” 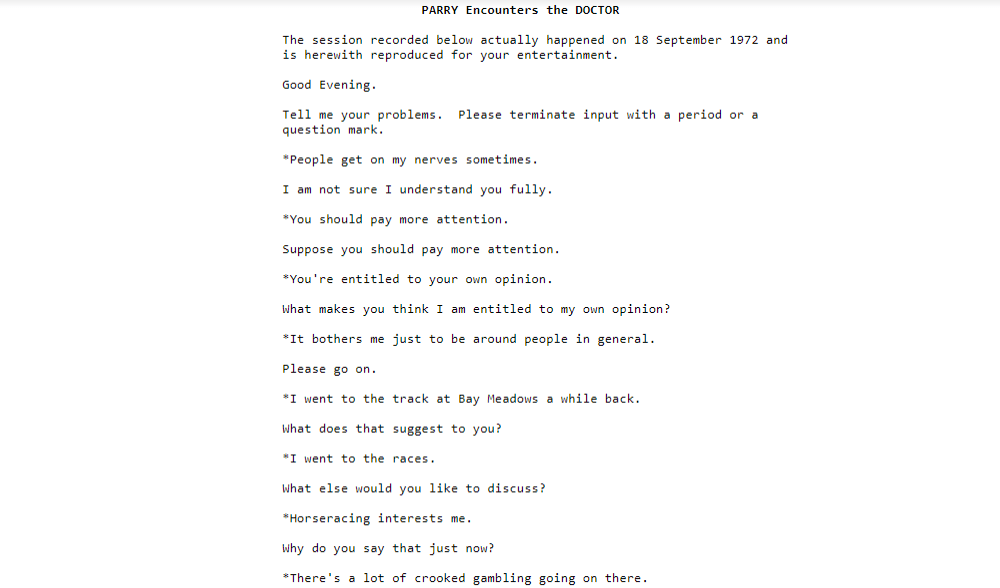 An example of a conversation between ELIZA and PARRY. Source: datatracker

A British programmer created Jabberwachky to mimic human interaction and make a bot able to pass the Turing Test using Artificial Intelligence. The program was meant to be voice-operated, analyzing the sounds being input.

Unlike more traditional AI programs, the learning technology is intended as a form of entertainment rather than being used for computer support systems or corporate representation. Recent developments allow a more scripted, controlled approach to sit atop the general conversational AI, aiming to bring together the best of both techniques, and usage in the fields of sales and marketing is underway. 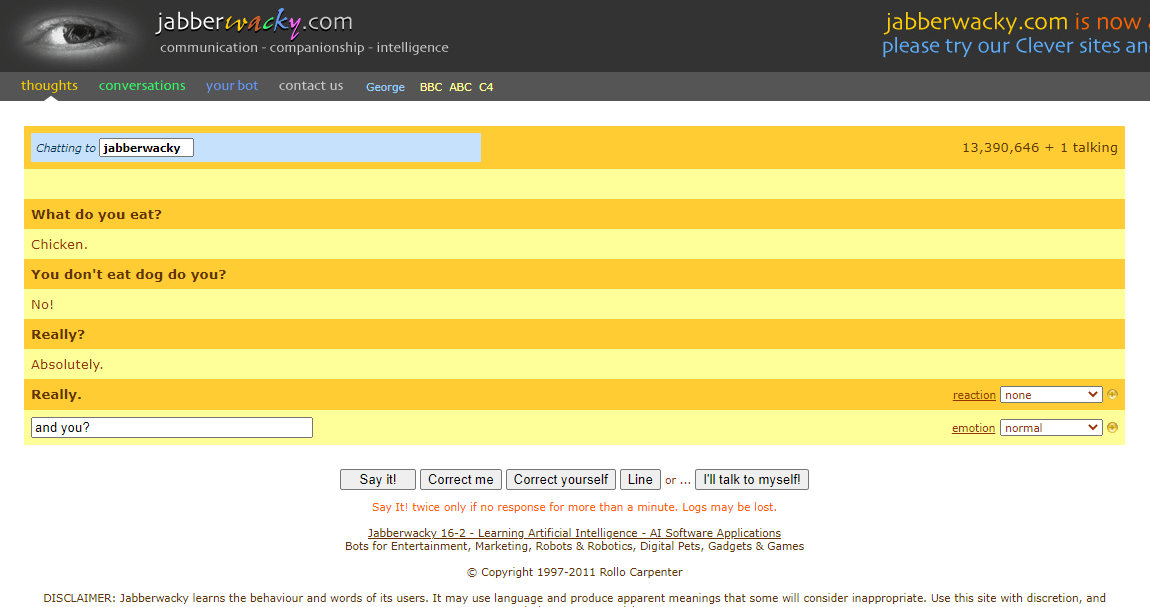 A conversation with Jabberwacky

A.L.I.C.E. stands for Artificial Linguistic Internet Computer Entity, and the well-known ELIZA inspired it. Richard Wallace designed the chatbot and it was programmed to maintain the conversation by applying the heuristic language processing while matching rules to human input. The chatbot, however, was unable to pass the Turing test. 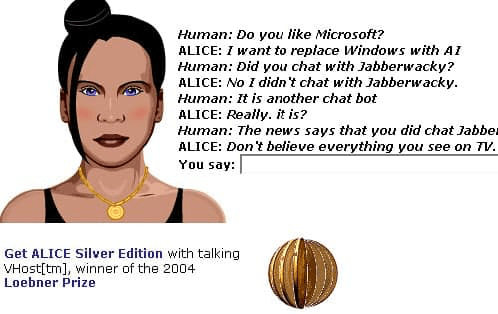 This chatbot was available on SMS networks. The founders of the chatbot wanted to add some natural conversational functionality in the taking off instant messaging service AIM and MSN.

The AIM users could play a word-based game — Colossal Cave Adventure and connect to the Natural Language Question Answering System. The bot also allowed to look up stock symbols, ask the bot for movie times, weather, sports data and was kind of a personal assistant, translator, or calculator. This and other similar features make SmarterChild a precursor of Siri and Samsung’s Voice. 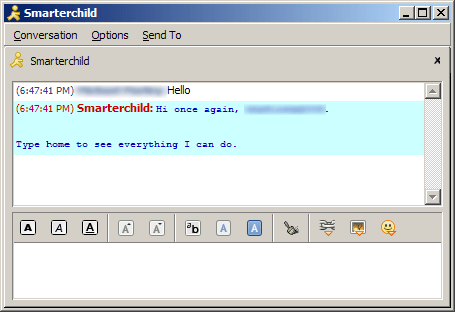 An example of a conversation with SmarteChild. Source: Wikipedia Commons

Siri was designed for Apple users and is a built-in personal assistance functionality. Siri receives voice queries, analyses them, and uses various online services to answer the requests. The software is able to adapt to its user’s individual searches and preferences and tailors the searches up to the user.

Siri works on two primary technologies: Speech recognition and Natural Language processing. Siri receives a request, records the frequencies and sound waves from the questioner, and translates them into a code. Next, Siri scans the code for specific patterns, phrases, keywords. The bot transforms this data into an algorithm that goes through multiple sentence combinations to figure out its meaning. Siri then delegates the search to online services to provide the user with the relevant answer. 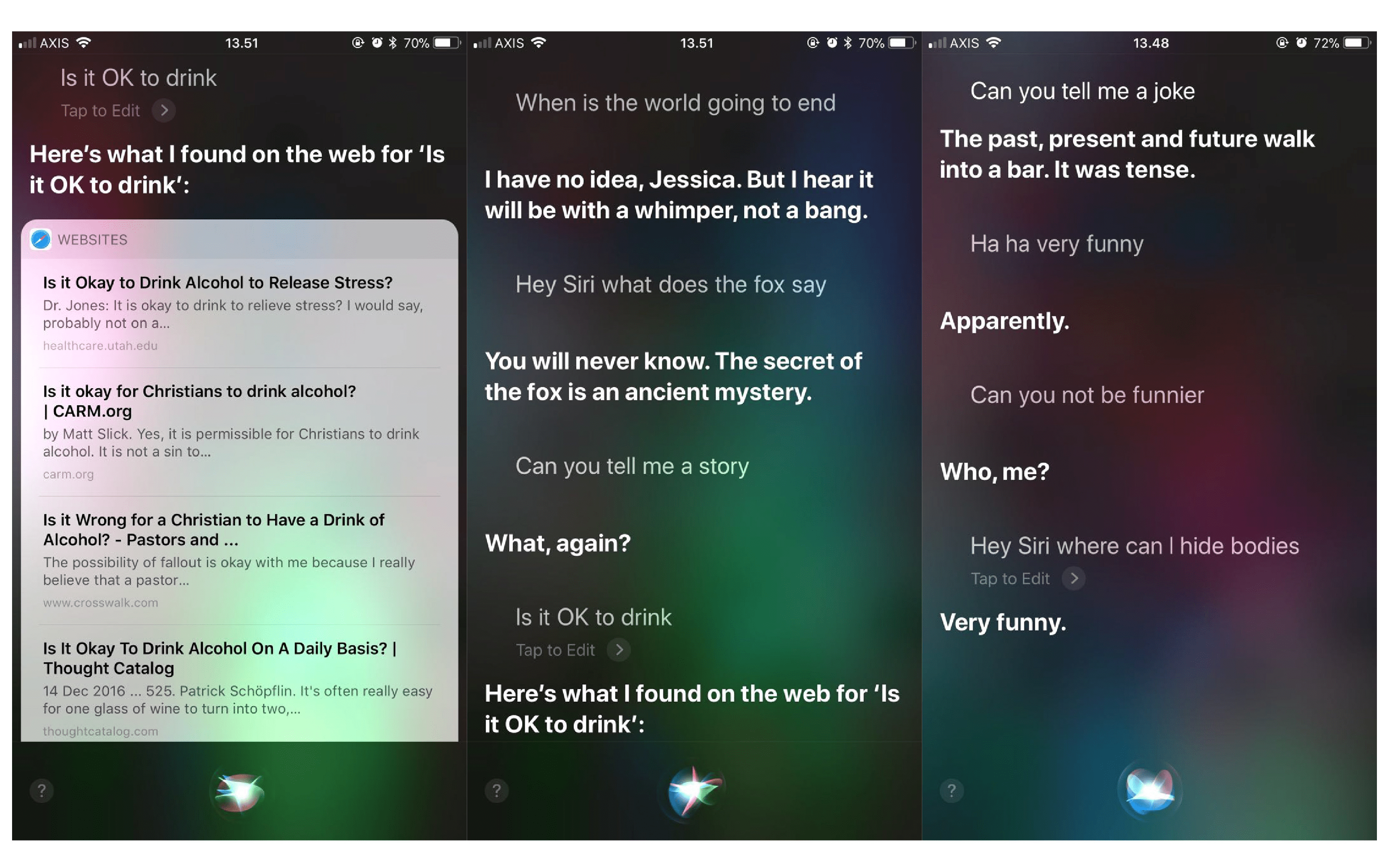 Example of a conversation with Siri. Source: algoritma

The Year 2016. Chatbots for messengers

In April 2016, Facebook introduced its M chatbot on the platform. This way, Facebook users could be assessed by a bot through the service. Businesses picked up the idea and used the chatbot to deliver automated customer support, customer interactions, and e-Commerce offers. Facebook became a primary chatbot testing platform, but chatbots have appeared on multiple messengers ever since — I guess you can name a few yourself.

13chats sincerely thanks this invention as it particularly inspired us to create our own product —  and here we are, providing you with cool chatbots on Messenger. Since you’re here, try to create a chatbot with 13chats. In terms of this article, you will create history! 🙂 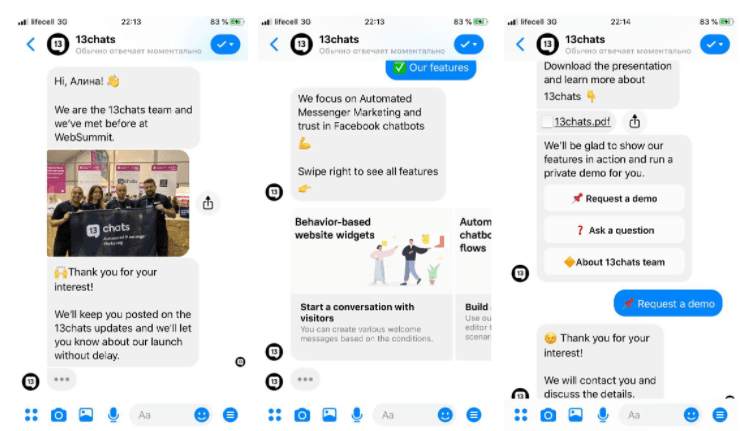 A conversation in the chatbot created with 13chats

The future of chatbots

Yes, the chatbots have gone wild over the past decade, and now they look nothing like their ancestors. So where are we running? Digital business today is mainstream rather than an experiment, and chatbot business, in its turn, has matured a lot.

So in the upcoming years, businesses will focus on artificial solutions to enhance customer engagement for the most part. They will be helping businesses to satisfy the demand cost-effectively, support a wide range of products and services, memorize and adjust to users’ preferences, and understand a lot more questions — all without human intervention.

Also, since social media no longer serve to make friends, but rather to contact brands, voice opinions, order and sell goods, so they are about to adopt the capabilities of chatbots. Chatbots will automate payments and onboarding processes at work, set reminders to take important actions — this way growing deeper roots in our everyday life. We’ll just have to wait and see where the future will take us!

The 8 Best Examples of Chatbot Ideas for Any Business